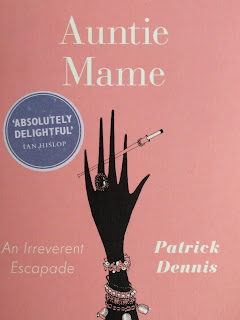 Auntie Mame: An Irreverent Escapade, written by Patrick Dennis (one of Edward Everett Tanner II’s many pen names), was published in 1955 and became one of the biggest American bestsellers of the twentieth century. Sixty three years later and the flamboyant Mame continues to capture hearts. In Italy, following a re-release, this comic novel topped Corriere della Sera’s general fiction list in 2009. Technicolor cinema fans, such as myself, would have instantly ordered a copy after watching the alluringly hilarious Rosalind Russell in the 1958 movie adaptation.

The novel begins in 1928 where an orphaned (and fictitious) 10-year-old Patrick is sent to Manhattan to stay with his only living relative - aunt and bachelorette Mame Dennis. Despite the wish of the child’s late father for his son to have a rigidly conservative upbringing and education, Auntie Mame has more colourful ideas. The shy Patrick is thrust into a decadent world of larger-than-life characters, excessive glamour and intellectualism. Upon the boy’s arrival, Mame instructs Patrick to write down every word she says which he has yet to understand. Patrick also quickly learns that 9am is the middle of the night for his aunt.

Every chapter leaps from one adventure to another, as Mame continuously reinvents herself due to circumstances altered by the Depression or pure impulsiveness. But more important than Mame’s dabbling badly in odd jobs, hosting wild parties or maximalist dressing, is her sheer dedication to raising her nephew to be an interesting and open-minded individual. Mame battles with Patrick’s stuffy trustee throughout his childhood and then, when Patrick is an adult, devises a deliciously gleeful plan to stop his marriage into a dull antisemitic family. The novel feels very much ahead of its time as its sharp tongued heroine frequently tackles racism and snobbery rife in wealthy society.

Auntie Mame: An Irreverent Escapade is a light camp novel with tremendous heart and wit. It is a book that will leave you wishing you knew an Auntie Mame growing up or become a little more like Mame yourself - a bold woman who refuses to conform to societal norms while having an abundance of fun and looking fabulous. I thoroughly recommend throwing on your best frock and fixing a cocktail especially to read this mid-century gem.