Showing posts from January, 2013
Show All

Review - Hollywood Costume at the V&A

Hollywood Costume is the V&A’s latest show stopping event, dazzling with an immense collection of costumes from silent film  to contemporary blockbusters and a highly thorough insight into the painstaking work that goes into creating costumes. Walking into the exhibition evoked the feeling of walking into a darkened cinema  - spine-tingling dramatic music and a huge screen ahead of you with a montage of popular films from the past century. Rather than using the orthodox method of showing exhibits in chronological order, Hollywood Costume is laid out according to subject such as characters’ backstory and ever-changing technology so you’d have exhibits made in different time periods placed right next to each other. There are also in-depth case studies such as the research that went into each character’s costume in Ocean’s Eleven - brilliantly displayed with the costumes (with actors’ faces on suspended small screens) sitting around a table filled with projected images of scripts, r
2 comments
Read more 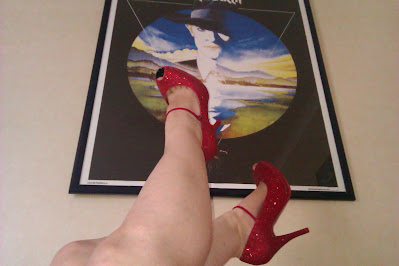 Welcome to my shiny new blog space devoted to arts, entertainment and good times from the decadent to the cheap and cheerful. Here I will update you with reviews and accounts of experiences of a diverse range of events and activities from exhibitions and theatre productions to cultural festivals and TV shows. I will also give you an insight into my culture heroes as well as films, music and shows that have made a long lasting impression on me.  2013 looks like it’s going to be a fun packed year whether you’re staying in watching the box or painting the town in all manner of sparkly colours. Enjoy the ride!   Next week: Review on V&A’s Hollywood Costume and my first Latin Ballroom class for Beginners.
Post a Comment
Read more