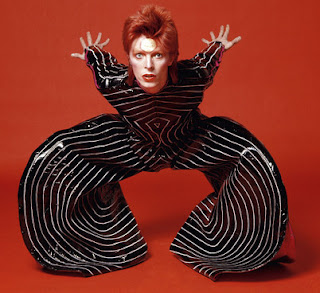 Following the success of Hollywood Costume, the V&A brings us another box office smash hit with David Bowie Is. So far in 2013, David Bowie has reappeared at the forefront of the public conscious with the build up to this exhibition and the release of new album The Next Day following a refreshingly subtle marketing campaign. The V&A’s latest offering will undoubtedly attract masses of visitors even more eclectic than usual to a single exhibition - there is no such thing as a typical Bowie fan. My first memory of Bowie was his introduction in the TV production of Raymond Briggs’ The Snowman with butter yellow hair and patterned jumper. But for others, their first Bowie memory could be anything from a Top of the Pops appearance from one of several decades to one of many feature films.


Before landing on the multi-faceted planet of David Bowie, the V&A’s latest blockbuster takes you to the land of Brian Robert Jones born and raised in the post-war South London suburbs. Bowie’s background is portrayed through personal items, such as his first guitar and a photograph of Little Richard, and other objects representing signs of the times such as a copy of the controversial Lady Chatterley's Lover finally published in 1960 and representing a gradual shift in British attitudes towards sex. At this early stage of the exhibition, you clearly see the drive, creativity and influences that led towards the creation of David Bowie the Pop Star.

The birth of Ziggy Stardust launched Bowie into major stardom and the show portrays this as such with precision. After the display of the Clockwork Orange-influenced Liberty print boiler suit as worn on a Top of the Pops appearance in ‘72 (which is blasted onto a huge screen behind the aforementioned suit), the exhibition explodes into a mass of striking eclectic images and minute details. 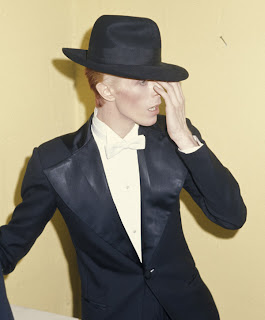 Costumes are surrounded by an abundance of sketches, brainstorming notes, lyrics, video clips ranging from interviews and music videos (even before MTV - Bowie had always been forward thinking) to current affairs TV programmes, documents (including mileage lists from tours!) and photographs clambering over each other to present the life and the artistic force behind David Bowie. The further you go into the exhibition, the more you realise that David Bowie is not just another pop or rock star but an industry and the V&A show is a walk-in encyclopaedia guiding you through it. 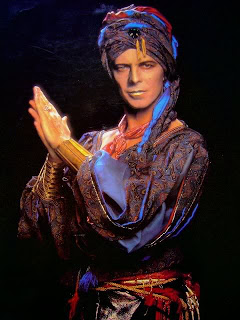 Other notable parts of the exhibition (there are so many!) include a life size replica of a sound booth, a compact square space in a corner devoted to Bowie's time in Berlin which is befittingly detached from the rest of the show and a room specialising in the films he starred in which will make 80s babies brought up on Jim Henson's Labyrinth very happy indeed. For what has got to be a first for me, I appreciated the headsets provided at the exhibition - music and voices would change accordingly and perfectly to fit with different stages of the exhibition (including the sounds of chatter and instrument tuning when you walk into the sound booth replica and David Bowie talking about his family when the show focuses on his childhood and adolescence) so you can completely and entirely immerse yourself in the world of David Bowie.

At the end of the show you are reminded of Bowie’s omnipresence. Flickering images show his influence on countless others in music, fashion, film and art. It’s hard to imagine how pop culture as we know it would have turned out without Bowie’s existence. Probably depressingly po-faced and with  fewer options. The exhibition’s title invites us to ask what or who exactly is David Bowie. But like the artist himself, the show offers no single answer. David Bowie is open to individual interpretations and the show emphasises this to great effect. David Bowie Is is a must see not just for Bowie fans but for anyone with a love for music, fashion and art  - three elements that go hand-in-hand to create something that can stand the test of time.

David Bowie Is - Until 11th August at the Victoria & Albert Museum. For more information visit http://www.vam.ac.uk

If you're a glam rock fan who won't get a chance to go to London to ogle Bowie's Ziggy Stardust get up, you may be interested in Tate Liverpool's Glam! The Performance of Style until 12th May. Visit http://www.tate.org.uk for details.