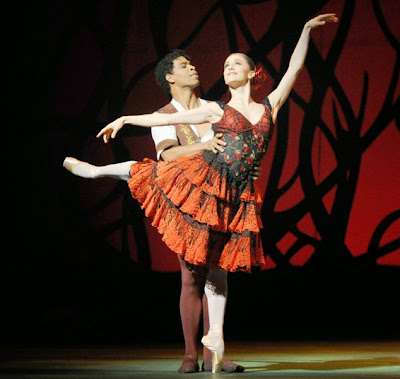 This autumn has seen one of the most highly anticipated classical dance events of the year - Carlos Acosta’s directorial debut for The Royal Ballet with his new production of Don Quixote. Acosta has previously directed his own shows, such as ‘Tocoroco - a Cuban Tale’, but in his fifteen years at The Royal Ballet this is a major first for the company.

Don Quixote is one of the happiest ballets around and Acosta has delivered a production full of lightness and humour with a re-orchestration of Ludwig Minkus's cheerful score by Martin Yates. Not only are the cast incredible dancers, who make single-handed lifts and thirty two fouettés look effortless, they are also good actors which emphasises the show’s charming quality. There’s passion and playfulness between Acosta and Marianela Nuñez as Basilio and Kitri as they tease, fall in love, bicker and make up all over again. Physical comedy is boundless with the likes of Christopher Saunders’ Don Quixote, his sidekick Sancho Panza played by Philip Mosley, and Bennet Gartside’s ridiculously foppish Gamache who could have tumbled straight out of a Restoration play.

Unlike many other classical ballets, there is strong individuality among the corps de ballet in this production of Don Quixote. The stage is alive with toreadors, gypsies and town locals all with their own characteristics and costumes that are rarely identical. There is also technical variety, particularly in the town scenes where flirtatious girls, elegant flamenco dancers and slapstick yet flawlessly acrobatic street urchins amongst others mingle.

Each scene is complimented by bright and multi-layered sets by Tony and Olivier award winning Tim Hatley. Like the characters onstage, the designs are full of colour and vibrancy. The town setting is framed by white buildings with terracotta rooftops and balconies set against a bright blue sky that transports you to sunny Spain. The windmill in Act II is made increasingly menacing for the over-imaginative Don Quixote as it slowly emerges from a deepening orange sunset backdrop and the following dream sequence is made all the more whimsical with Alice in Wonderland-esque giant purple flowers proudly towering over a pretty-in-pastels corps de ballet.

Carlos Acosta’s production of Don Quixote is a great balance of technical mastery and fun in abundance. This is a joyful ballet filled with variety but unlike The Nutcracker, which also has those qualities, it’s not dismissed as childish. Acosta’s Don Quixote is a camp, highly animated yet heartfelt production that raises the audience’s spirits. There were a lot of smiles coming out of the Royal Opera House on the dark rainy night that I attended. Here’s hoping there will be more Acosta-directed productions at The Royal Ballet to look forward to in the future!