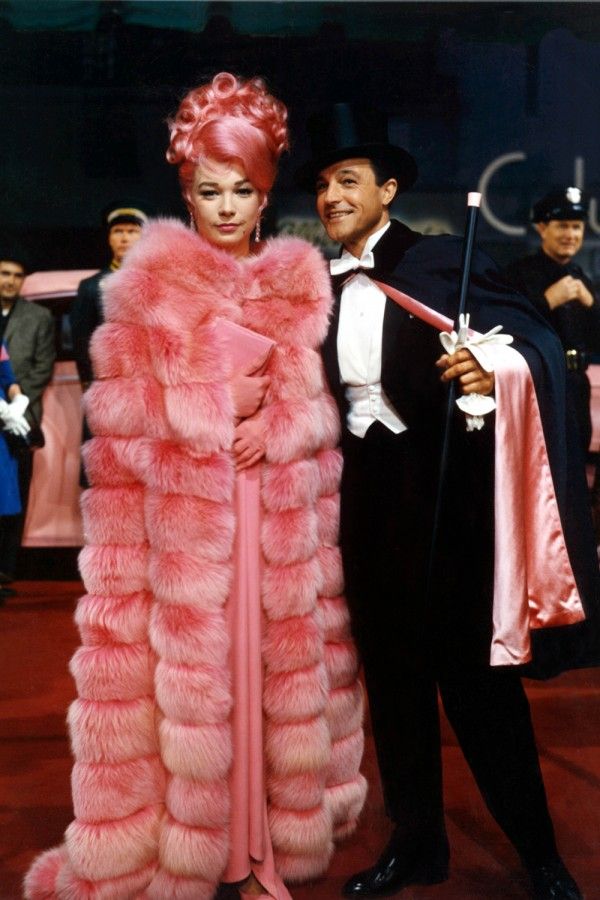 Bold and elaborate costume design exhilarates me. When I’m low on energy, I google images of Bob Mackie creations instead of buying chocolate as a little pick-me-up. What A Way To Go!, a star-studded dark comedy from 1964, is the visual equivalent to a freakshake-induced sugar rush.

With costumes designed by the legendary Edith Head, MacLaine’s character is frequently reinvented as she moves from one doomed spouse to another. Before money enters Louisa’s world, she is as sweet as apple pie in frills and red polka dots. With each husband comes a different lifestyle as well as a more sophisticated image. Living in bohemian Paris, with Paul Newman’s American artist/taxi driver, Louisa dons a simple burgundy dress with a plunging neckline and hip-split skirt. This dress, suggesting European sexual carefreeness, is replaced by abstract evening dresses covered in paintings and sculptures as Louisa’s husband becomes a major celebrity in the art world. Back in the States, marriage to Robert Mitchum’s business tycoon means a wardrobe fit for a First Lady and Gene Kelly’s struggling performer Pinky accidentally gets his big break and transforms everything - including his wife - pink!

As well as costume changes, along with each husband comes fantasy sequences sending up popular film genres. Louisa’s first marriage to initially poor and humble Edgar (Dick Van Dyke) cues a black and white silent movie where the newlyweds slapstick their way through domestic blunders. In Paris, there are subtitles and barely concealed nudity. The most lavish fantasy - inspired by big-budget extravaganzas from the previous decade - accompanies Louisa’s marriage to Mitchum’s Rod Anderson. It is the Louisa/Rod fantasy where Edith Head doesn’t hold back on incredible Hollywood glamour that goes hand-in-hand with the decadent sets. Countless outfits of diamonds, feathers, fur and couture-esque surprises glide past the screen with a backdrop of limousines, gilded pianos and candelabras. And isn’t it everyone’s dream to make love in a giant Champagne coupe?

Everything in What A Way To Go! Is larger than life from start to finish. You could watch the film on mute and still follow the story. Louisa’s surroundings spell out how her relationships change as fortunes rise - in a Parisian studio, intimidating music-prompted machinery takes up entire spaces and towers over Louisa as it splatters paint over giant canvases and, in another marriage, Louisa sunbathes alone in an entirely pink garden while her showbiz partner is busy making ego-inflating demands at meetings. Even before the demise of a husband, Louisa usually already feels isolated amid the wealth and indulgence.
What A Way To Go! is a film that's equally silly and stylish. 20th Century icon credits include Dean Martin and choreography by Gene Kelly. But the highlight is Edith Head's Oscar-winning costumes for MacLaine, which are delightfully unpredictable and also narrate the Louisa's story. A must for all Old Hollywood and fashion fans everywhere. 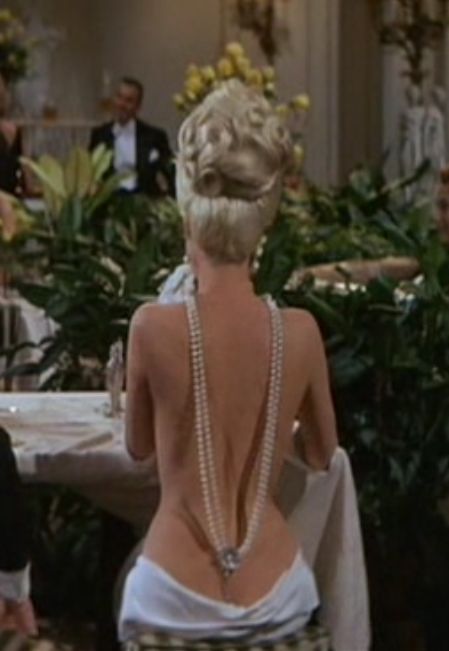